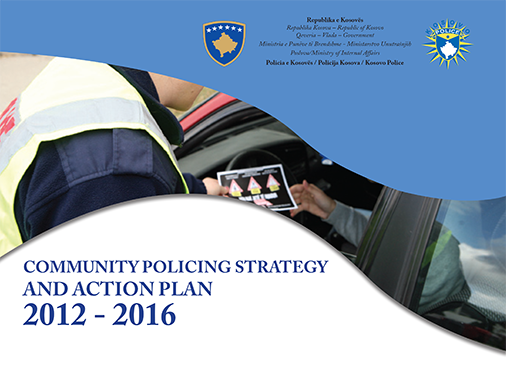 This 5-year strategy, through community oriented policing and in full partnership with Kosovo society, aims to achieve the strategic objectives of the Kosovo Police and enable the needs of Kosovo citizens to become the aims of Kosovo Police.

In Kosovo, according to traditional police philosophy, the police are a law enforcement institution, regardless of the constitution and legal standing, designated to provide protection and improve security for society in general, from individuals or groups that harm the security and welfare of others in society.

Kosovo Police was established in 1999 as a democratic institution to guarantee public order and safety; to protect life and the property of citizens; to provide free movement of people and goods, as well as to respect and protect human rights and freedoms and in this aspect encouraging results have been achieved.

Kosovo Citizens do not see police any more as an instrument of violence, whereas cooperation with the police is no longer perceived as loyalty to police by citizens. Based on the general analysis of KP interaction with local government, civil society and citizens, it is noted that the results are not at the desired level.

Given the past and the aims of the KP to become a really democratic police organisation, that cooperates with citizens, it is the duty of the police to make the first step.

On the other hand, given that the police are in the service of citizens, it is clear that citizens should not remain passive towards this cooperation. However, the degree of citizens’ commitment, be it as individuals or as a society in general, to support police or to improve those services is still not in the required level.

Since the late ‘70s, law enforcement agencies in USA and in Europe have studied, developed and implemented a strategy of policing in the community.

Community policing is the term that is used to describe a wide ranging philosophy, including strategy and police tactics which is determined as “problem orientated policing”; “neighbourhood policing”; “ community oriented policing ”.

Implementation of this strategy is not universal in all countries, but in principle, it is clear that the community policing is a philosophy that allows police and community (citizens) to work together for ensuring the public order and safety of citizens in the community.

With the adoption of the philosophy of community policing, “together”, we mean that partners should take over roles, responsibilities and actively participate.

To implement this strategy there are a huge number of programmes, together with principles and practices that deal with these issues.

This policing strategy does not aim to be an additional item, but it seeks to improve on the current level of cooperation between police and the community in Kosovo; to identify problems, obstacles, challenges and perspectives, in implementing the philosophy. To analyze the best practices and shortcomings of the past and as a result design a model of community policing, that should be implemented in order to improve the current situation.