Report "Police accountability in the Republic of Armenia" 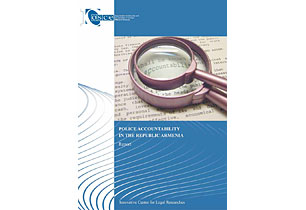 Police accountability is vital in every democratic society. The Republic of Armenia is not an exception to this rule. Both individual officers and law enforcement agencies must be held to account for their actions. The lawfulness and legitimacy of Police actions is directly dependent upon the effective accountability procedures applicable to the police. This is the only legitimate way for the Police to achieve its goals of reducing crime and disorder, enhancing the quality of public life and serving the community needs. Contrary to the popular view that effective crime control and respect for constitutional principles are competing values in policing (Packer, 1968), experts today increasingly recognize that lawful conduct and accountability are essential for crime-fighting (Bayley, 2002).

A positive step for effective policing in Armenia would be regular performance evaluations, which must be fair and objective. They are the best way to identify and correct performance shortcomings and to warn and terminate the police officers whose performance is substandard. Allegations of police misconduct can originate either from internal or external sources. Allegations from external sources deserve special attention, as it involves formal and informal complaints by citizens. This is where police-public partnership comes to play a central role in keeping a close eye on the entire system.

Although it is evident that the public can play a role in the quality of the police work, an opinion poll conducted by the OSCE Office in Yerevan in 2009 revealed that 70-89 percent of the society were not willing to collaborate with the Police. The only means of cooperation is to alarm the Police strictly in case of need (77 percent of Yerevan population). However, one should give due regard to the fact that there are other means of public-police partnership not simply including response related, but ensuring day-to-day cooperation and partnership. This should facilitate bringing the public closer to the Police and carrying oversight on a better and advanced level though understanding mutual needs and interests. One of the models entertained in Western countries are public forums that gather the members of a respective community to discuss security and defense issues together with the Police.Another option of effective oversight can be the establishment of City Security Councils. These Councils involve not only civil society actors and Police representatives, but also all other institutions dealing with security matters in a larger meaning of this notion. This may include officials from Ministry of Social Affairs, Ministry of Sports and Youth, Mayor’s Office, etc. These Councils may play as great preventive and proactive tools for holding the Police accountable.