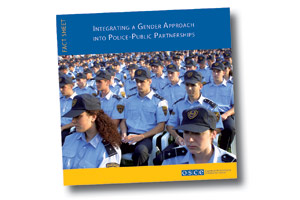 This fact sheet, published by the Gender Section of the OSCE Secretariat, shows linkages between police-public partnerships and gender considerations. It aims at providing OSCE police advisers, their implementing partners and other relevant staff with an introduction to the basic knowledge of mainstreaming gender in community policing.

Crime statistics show that men and women face different security threats. For example, crimes against men such as robbery, assault and homicide take place predominantly in public areas whereas the main crimes against women such as domestic violence, sexual assault and rape often happen in the private sphere at home or the workplace.

A prerequisite to gaining public support is providing for transparency of police operations and cultivating communication and mutual understanding between the public and the police. Thus, OSCE police-public partnership projects focus on measures to achieve transparency and communication such as the creation of forums for open discussion of crime and safety problems, the public dissemination of reports on crime and police operations, the establishment of mechanisms for the public to request police service, and outreach to minority groups.

Mainstreaming gender into a police-public partnership project requires that male and female population groups have equal access to the police, are reached by police activities and are involved in any participatory measures according to their needs.