Manual: How to respond to domestic violence with a special focus on Albanian state police 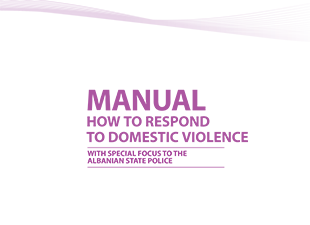 This manual is designed as a general guideline for all the stakeholders involved in the fight against domestic violence, with a special focus on the staff of the Albanian State Police, taking into consideration that they are first responders to domestic violence.

The manual consists of four main parts which provide practical knowledge based on the actual laws in force in the Republic of Albania on the treatment of the victims and different domestic violence situations. The manual is designed to be easily consulted by all stakeholders.