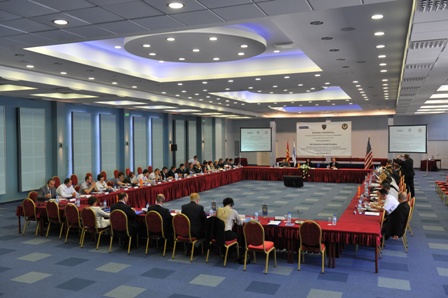 The objective of this conference, organised by the OSCE Mission to Skopje, was to encourage accountable and transparent internal oversight mechanisms within the Police to fight against corruption in a democratic manner.

The conference was a continuation of a similar project implemented in 2010 when the first Regional Conference for the Units for Internal Control from the same countries was organized.

The Deputy Head of the OSCE Mission to Skopje and MoIA State Secretary Ralf Breth opened the Conference, which was attended by 48 direct participants, police representatives from nine countries in the region, along with the representatives from the OSCE, as well as the co-organizers ICITAP, MoIA and EUROPOL. During the conference the attendants discussed various methods used in their countries to fight police corruption. The agenda also included criminal corruption investigations and examples of already established regional co-operation methods. Furthermore, the participants discussed the possible establishment of a regional co-operation network to fight police corruption which would include regular exchange of information between the countries in the region.

The most important conclusions and recommendations of the Conference are as follows:

The Conference once again proved that corruption is a phenomenon which ignores borders and requires efforts to fight against it on a regional level. The combat against corruption needs mutual cooperation and joint responses. Therefore, forums like this give opportunities to discuss problems and to develop possible future networks.