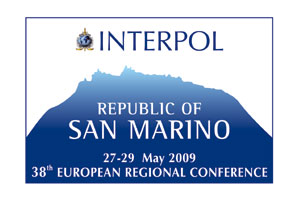 The conference focused on a number of issues including co-operation in combating organised crime and drug trafficking, support and co-ordination in fugitive investigations, combating financial and high-tech crime, police information exchange throughout Europe and globally as well as on INTERPOL’s Global Security Initiative.

Senior law enforcement officials from throughout Europe gathered in San Marino from 27-29 May, 2009 for the 38th INTERPOL European Regional Conference.

The opening ceremony and speeches by INTERPOL Secretary General Ronald K. Noble and senior San Marino officials were open to the media at 9.30am on Wednesday 27 May.

A press conference was held immediately after the ceremony at approximately 10.15 am, in which Secretary General Noble and senior San Marino officials participated.

The conference itself was closed to the media, however a press briefing with specialist officers from INTERPOL was held on the second day. Opening and closing press releases was also issued and made available on the INTERPOL website.