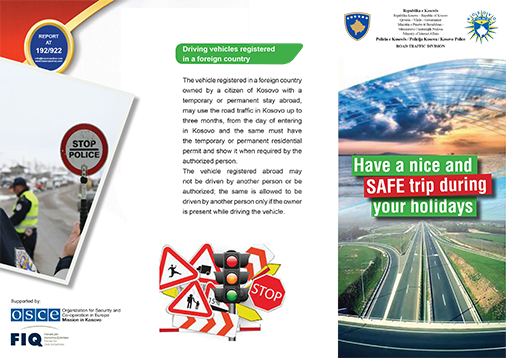 This awareness campaign, organized by the Mission together with Kosovo Police and the Forum for Civic Initiatives (FCI), aims at educating traffic participants on the traffic rules and the drivers role in preventing traffic accidents.

Observations and the accident and casualty data analysis provided by the Kosovo Police showed that the number of accident that had decreased during the period of implementation of the 2011 campaign “Second Patrol”, in 2012 - 2013 had shown an increasing tendency. The type of road accidents highlighted in the data have given an indication of the behaviour(s) to be targeted by the OSCE Mission in Kosovo, as a proactive participant at the development of the security and public safety sector in Kosovo according to international best practices.

As a result, the DSPS together with Kosovo Police and Forum for Civic Initiative met and agreed to develop a traffic safety awareness raising campaign. In order to have a successfully designed campaign, experience of the DSPS and KP experts in designing campaigns has been used to reach all Kosovo communities as well as the visitors.

According to the data, most of the accidents are caused as a result of noncompliance with traffic safety rules such as: Disregarding speed limits, phone use and non-compliance with safety belt regulations, noncompliance with rules related to the pedestrians. Accordingly, 30,000 leaflets have been produced to cover the above mentioned causes of accidents. The campaign has been implemented throughout Kosovo to reach the participants in the traffic, including the visitors who are travelling to and through Kosovo.

The OSCE Mission in Kosovo proactively participates in the development of the security and public safety sector in Kosovo to ensure its sustainability according to international best practices. Since January 2007 the OMiK Department for Security and Public Safety has been providing support not only to the development and the capacity building of the Kosovo Police but also in safety campaigns. These campaigns are designed to offer the people of Kosovo the opportunity to increase awareness for the sake of personal safety, by emphasising that the safety is everyone’s concern.