Police and Roma and Sinti: Good Practices in Building Trust and Understanding 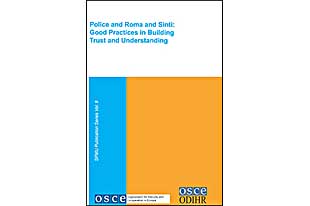 This publication aims to assist participating States in implementing their commitments under the 2003 OSCE Action Plan on Improving the Situation of Roma and Sinti within the OSCE Area by identifying principles and good practices that can be used in efforts to improve relations between the police and Roma and Sinti communities. This is the Volume 9 in the SPMU Publication Series.

Roma and Sinti communities live throughout the OSCE region and constitute the biggest ethnic minority in Europe. Despite their rich cultural, linguistic and historical diversity, a large number of these Roma and Sinti groups share a common problem: they are subject to sometimes overwhelming discrimination and marginalization in many spheres of public life, such as access to public services, housing, health care, education and employment. Roma and Sinti also are vulnerable to racially motivated violence, which sometimes results in severe injuries and even death.

Challenges faced by Roma and Sinti in their relations with the police range from ethnic profiling, disproportionate or excessive use of force by police against Roma to failure by the police to respond effectively to Roma victims of crime and racist violence. Furthermore, Roma and Sinti often face a lack of means and knowledge to challenge and obtain redress for police misconduct.

Although many participating States have developed their own anti-discrimination and integration policies with regard to Roma and Sinti communities, they are rarely implemented in practice and, moreover, often neglect the policing aspect or fall short of identifying the policing issues specific to Roma and Sinti.

The publication will be structured along major issues that are relevant for improving relations between the police and Roma and Sinti: