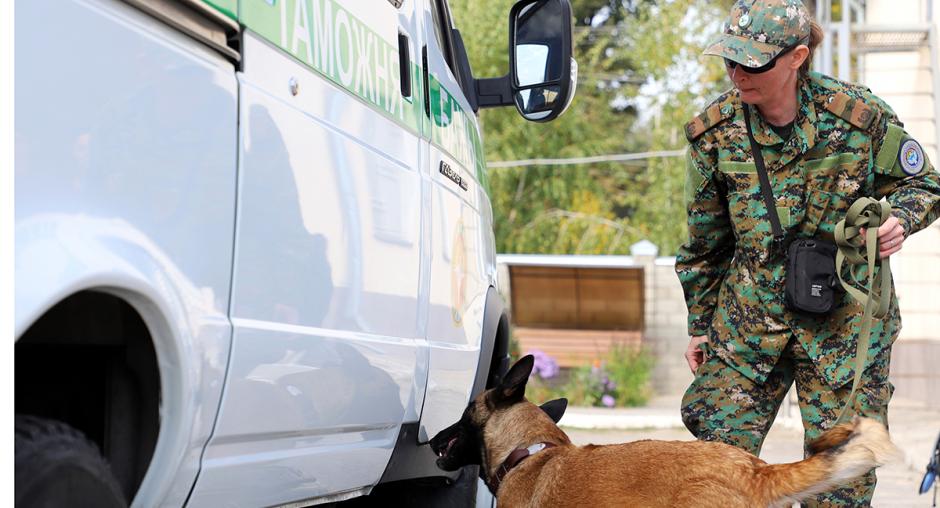 More than 25 canine officers (K-9) of the State Committee for National Security, Ministry of Interior and the State Customs Services (KSCS) completed OSCE-supported advanced train–the-trainers courses at the World Customs Organization’s Regional Training Centre in Bishkek from 7 to 25 October 2019.

These three-week training courses aimed at building the capacity of K-9 officers by providing an advanced theoretical knowledge and practical techniques for the detection of explosives, narcotic substances, currency, and animal derivatives that fall under the Convention on International Trade in Endangered Species (CITES).

The K-9 teams were exposed to various scenarios whereby they had to find markers with pseudo bombs, illegal substances, currencies, and animal derivatives placed in cars, buildings, rail wagons, parking areas and other simulated zones at the Regional Training Centre premises. At the end of each week, the canine officers completed a written test and competition-based exercise.

The training courses were organized by the State Customs Service of the Kyrgyz Republic in co-operation with the OSCE Programme Office in Bishkek.

The KSCS Training Centre in Bishkek was recognized as a World Customs Organization’s Regional Training Centre in 2018 with the support of the OSCE Programme Office in Bishkek. Since then, the Centre has been expanding its geographic coverage and enhancing the quality of the training courses for customs officers it provides in the OSCE region and beyond, contributing to regional co-operation.