Understanding the Role of Gender in Preventing and Countering Violent Extremism and Radicalization That Lead to Terrorism: Good Practices for Law Enforcement 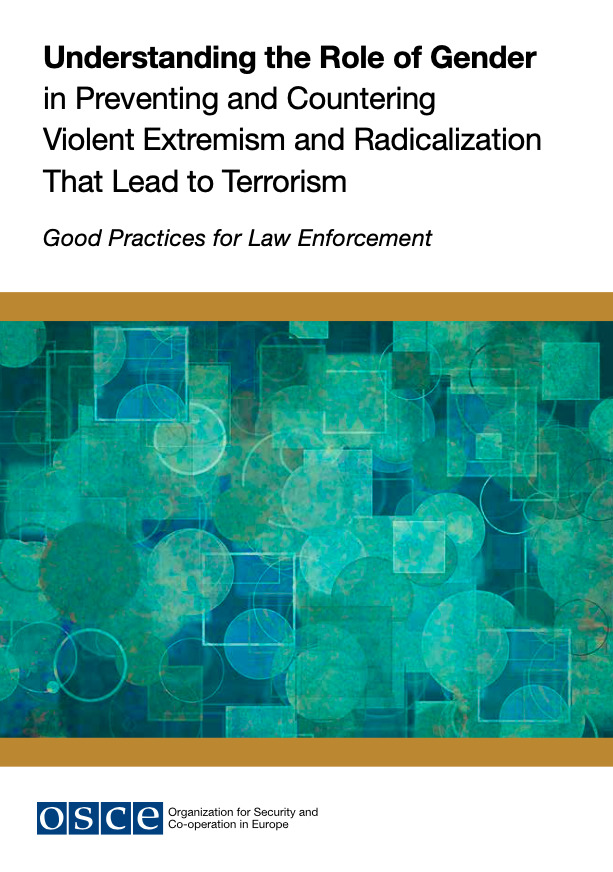 This handbook was prepared by the OSCE Transnational Threats Department
(TNTD) Action against Terrorism Unit (ATU).

This handbook reflects the OSCE’s commitment to supporting a gender-aware approach for the security sector in preventing and countering violent extremism and radicalization that lead to terrorism (VERLT). The OSCE participating States have recognized the significance of gender in several commitments, including the OSCE Ministerial Council Declaration No. 4/15 on preventing and countering VERLT, which was adopted in Belgrade in December 2015. The OSCE also supports the UN Security Council Resolution 2242 (2015), which calls for the greater integration by States of their agendas on women, peace and security, including on counter-terrorism and P/CVERLT.

A key component in achieving a gender-sensitive response to the threat of VERLT is to ensure adequate representation of women in the security sector, around the table when policy and programming is being defined, as well as in operational law enforcement roles. It is also necessary, however, to ensure that both men and women in law enforcement are aware of the different experiences and challenges VERLT presents to women and men, as well as girls and boys. This includes how different people are targeted for recruitment, how they work to prevent VERLT, and how they may differently experience victimization by violent extremist groups. It also includes a deeper knowledge of the gender stereotypes exploited by violent extremists, and why it is important that communities and law enforcement work together to debunk such stereotypes. This can promote positive role models and narratives that serve to strengthen tolerance and prevent VERLT.

This handbook serves as guidance for law enforcement and security actors on how to better understand gender dynamics in VERLT, and aims at helping them create better and more gender-sensitive responses. It complements the series of regionally focused handbooks published by the ATU in 2018/19 about the challenges in developing and implementing effective programmes on P/CVERLT. While this handbook is tailored to law enforcement, it is anticipated that it and other ATU publications will be valuable resources also for those policymakers and civil society actors across the OSCE area who are working to foster inclusive approaches to peace and security.

VERLT are transnational challenges which are not restricted to any nationality, ethnicity, religion, ideology or gender. The unpredictable and evolving nature of these threats makes them difficult to prevent and counter. The OSCE participating States have been unequivocal in their condemnation of terrorism and violent extremism, as well as in their support of a multi-dimensional approach that focuses on the prevention of VERLT.

The OSCE believes in a whole-of-society approach to preventing and countering VERLT. This reflects the understanding that efforts to counter terrorism and violent extremism can no longer be the responsibility of only security actors; to be effective, a co‑operative and inclusive approach to preventing and countering VERLT (P/CVERLT) is required, one that involves other government entities as well as civil society actors. This also means that trust and communication between security actors and communities must be improved. While successful civil society efforts to prevent and counter VERLT take into account the importance of families, women, youth, educators, and religious and community leaders, the security sector has historically been slower in embracing diversity, including aspects related to gender. This can be seen in the percentage of women working in the security sector, as well as in the common lack of gender sensitivity in police services that engage directly with communities.