UNODC Handbook on effective police responses to violence against women 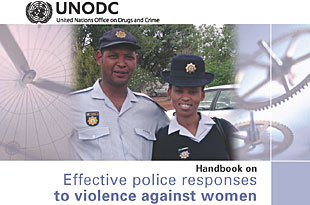 Violence against women is a global issue of pandemic proportions, which has an impact on all societies. It violates the rights and fundamental freedoms of victims. Such violence can have a devastating effect on the lives of victims, their families and communities. Studies conducted on all five continents suggest that no society can consider itself immune from such violence. Violent practices that victimize women and girls transcend social, cultural, ethnic and religious boundaries.

Police are at the frontline of the criminal justice system. They are often called upon to intervene when an act of violence is in progress or shortly after it has occurred. Police work with victims, offenders, witnesses and various forms of evidence. Their attitude and response to all involved can have a dramatic impact on ensuing developments, including the prevention of future violent acts and the protection of victims. For example, in situations of recurring acts of domestic violence, the police response can help victims leave a violent relationship or, conversely, the victim, believing that nothing and no one can assist them, may remain in an abusive, violent setting.

Police have long been under criticism for not doing enough to protect women from violence and for an often apathetic attitude towards the problem. However, police are only part of a much larger system: the cooperative, coordinated and effective involvement of courts, prisons, communities, non-governmental organisations (NGOs) and civil society is required to protect women against violence.

This Handbook is divided into seven chapters, with two annexes. It starts by setting the context and describing various forms of violence against women and justice system responses to such acts. This section (chapter I.A) is intended to raise the general awareness of the reader to the various forms of violence against women. The Handbook then goes on to identify applicable international conventions and standards, and state obligations, including those applicable to the police. The bulk of the Handbook focuses on suggested police responses to violence against women, including the police role in prevention, investigation and protection of victims and witnesses. Issues of threat assessment and management are addressed, as is personal safety planning for victims and the role of support agencies and services in the protection of women. Prosecution is addressed, as is inter-agency collaboration and the need to coordinate services that help enhance the safety of women. The annexes provide resources to assist police in their investigations and their ongoing learning.