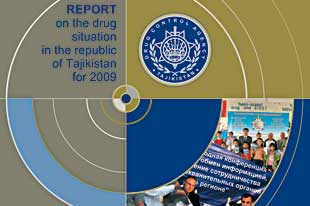 This report contains analysis of drug-related situation in Afghanistan and Tajikistan, description of criminal market of narcotic drugs and international co-operation in combating illegal drug trafficking in the region.

This report was published by the Drug Control Agency under the President of the Republic of Tajikistan with the financial support of the OSCE.

Globally millions of people suffer from the use of narcotic drugs and psychotropic substances, hundreds of thousands families live in deprivation, thousands of people, especially young people, die.

Drug industry has become one of the serious world problems which cause colossal damage to socio-economic basis of community and health of mankind.

Illegal drug trafficking creates conditions for committing different crimes, especially of a transnational character, including terrorism and extremism; which is why today the world community is alarmed and concerned about it.

No country in the world, despite its potential and capacities, can stand alone against the spread of drugs which can pose multiple threats before mankind. In connection with this one of the conditions for effective counteraction to this global threat is the establishment of a multi-step system for international cooperation.

Back in 1995-1996 with the aim of strengthening of anti-drug cooperation our country joined UN Conventions of 1961, 1971, 1988 and signed more than 30 intergovernmental agreements within the framework of which the Republic of Tajikistan jointly with all interested states and international organisations is ready to continue combating this evil. The required normative and legal base is in place.

Since 1999 till today in Tajikistan out of 20 projects of the UNO and other international organisations in the sphere of combating narcotic drugs, 14 were successfully implemented, the rest are on the implementation stage.

One of the priority tasks of the Drug Control Agency under the President of the Republic of Tajikistan, competent bodies and power structures of the Republic is targeted and systematic combat against transnational criminal groups which smuggle narcotic drugs from Afghanistan. Realities of today show that the activity for identification, neutralization and institution of criminal proceedings against drug dealers requires continuous improvement of the working approach for identification of the sources and channels for the transportation of narcotic drugs.

For these purposes required measures are undertaken for the suppression of the activity of organised criminal groups, blocking the channels for the movement of narcotic drugs in and out via the state border and broadening of cooperation with the relevant structures from foreign countries.